I just got back from New York after a very exciting few days. I met Simone (Zenbelly) and we gave our 2 minute spiel at the Jewish Book Council which was equally as terrifying as it was incredible. We were very well received by hundreds of people, some of whom approached us afterwards about coming to do author events around the country. So if you didn’t get to come to a signing for The New Yiddish Kitchen, there may be more opportunities on the horizon! But before we presented, I basically ate my way through New York City.

It was amazing and thanks golly for all those miles walked because I ate like I was pregnant with twins. Delicious gluten free food at every turn made me super grateful for the progression of gluten free eating and how much easier it is to dine out now than it was when I first gave up gluten in 2009. Ok onto the food, I know that’s why you came here. I wrote this to cover gluten free dining in NYC, not paleo. There are some paleo options but when I travel I tend to splurge a little so I will eat more gluten free (and yes some dairy now that I am further along in my healing – it’s a vacay thing not a daily habit).

We (I dragged my family along) arrived on Sunday and as soon as we checked into the cute Airbnb in Greenwich Village started walking around the hood to see what it was about. I stumbled upon SPRINGBONE which was a very exciting find, literally on the same block as our apartment. They offer paleo options like multiple bone broth varieties and zoodles with meatballs. They also carried a few ready to eat goods that were paleo friendly. I had the grassfed beef bone broth and it was delish and the perfect snack before supper. They also offer butter coffee which my husband chose. It’s not a full service restaurant but has quite a nice selection. For dinner I found PIE BY THE POUND , a pizza place that offered thin crust gluten free options, and so we walked about 20 minutes and ordered their thin crust pizza. We got a pepperoni and mushroom and a cheese and split them among the 5 of us. Aaaaand then we ordered one more because we were starving and it was delicious! They also offered a few treats like gfree brownies and chocolate chip cookies, much to our kids’ delight! The next morning I had planned on attending Sadelle’s which Amy from WhatJewWannaEat told me about – I could just taste that bagel and lox when I discovered it’s CLOSED ON MONDAYS! This is super important if you are dying for a gfree bagel, so plan ahead! We ended up at a little place in the neighborhood which really was not worth mentioning I’m sorry to say, but luckily had some great gfree options (actually paleo too) – I had the corned beef hash, breakfast potatoes, and bacon. After a hearty breakfast we headed out to see the Statue of Liberty, our kids were chomping at the bit during our other visit to the city and could not wait to get there. We chose not to eat on the island though I did see some options in the cafe that could have worked. However, I was holding out for LILLI AND LOO because OMGGGGG their gluten free Chinese food (which we had during our trip last month when Simone and I appeared on Good Day New York) was out of this world. It’s like the Chinese food you have to give up when you give up gluten… and it is heavenly. 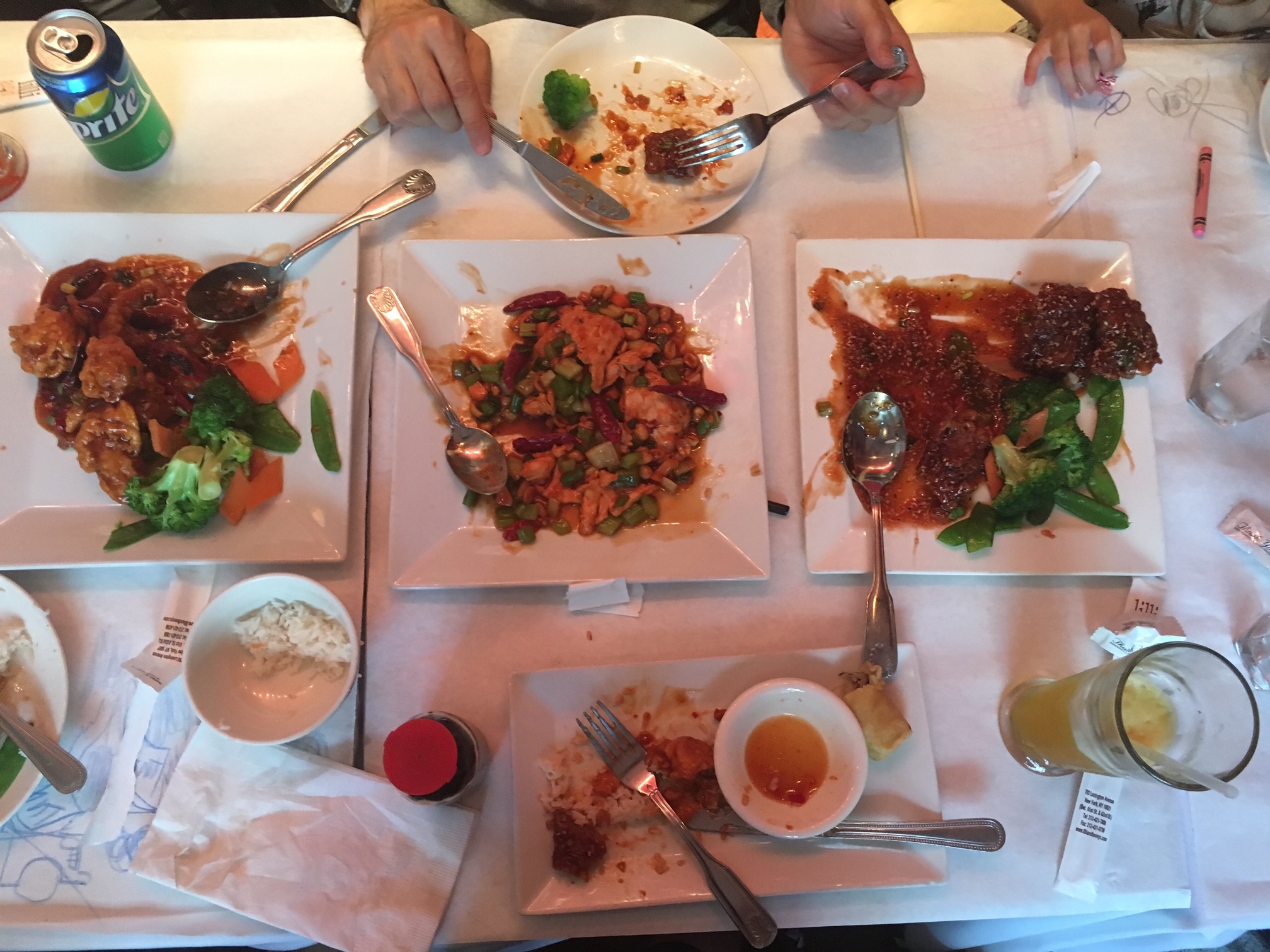 Yes those are gluten free Spring Rolls (Egg Rolls) made with a rice based exterior. I am still dreaming about them! We also got Kung Pao Chicken, Sesame Beef, and General Tso’s Chicken – because we COULD! Does it seem like all we did was eat?! Well you aren’t far from it but we also walked miles and miles each day. We did not take much in the way of transportation except to get to Lady Liberty and when my husband took the kids to see a Broadway show. So we definitely worked up an appetite. Even the kids ate their weight in food! This lunch was sort of an odd time and we all ended up taking a rest after our long morning out so when it was time for supper we were sort of too tired to do much. I had just seen on the local news that a place called POMMES FRITES which had its original East Village address for 18 years, was reopening THAT DAY after having been burned down months back. The new address was right by our pad so guess what – we had a french fry dinner. Judge as you might, I am all about living in the moment and it was the best decision! The french fries and sauces are gluten free (well most of them) and the entire menu is devoted to fries and sauce. Like 20 ways to dip your fries including, wait for it, poutine! Their poutine is vegetarian and gluten free so I dove right into that one and never looked back. So the next day we woke up and FINALLY got to SADELLE’S. Let me tell you what – the experience at Sadelle’s is just so memorable you really must go. The restaurant itself is gorgeous gorgeous gorgeous and you can watch the bagel makers right in the center of the restaurant work their traditional boil and bake method just like in The New Yiddish Kitchen. The presentation and ambiance were incredible and the service was spot on. My kids devoured the lox, veggies, gluten free bagels and schmears. My husband got fried potatoes with his eggs that were roasted fingerlings that were later smashed and fried with onions in schmaltz. HOLY moly they were good. I did not ask how the gfree bagels were handled separately in terms of making them so that’s a question to ask if you are sensitive but I was really impressed with their knowledge of the menu and what was safe. 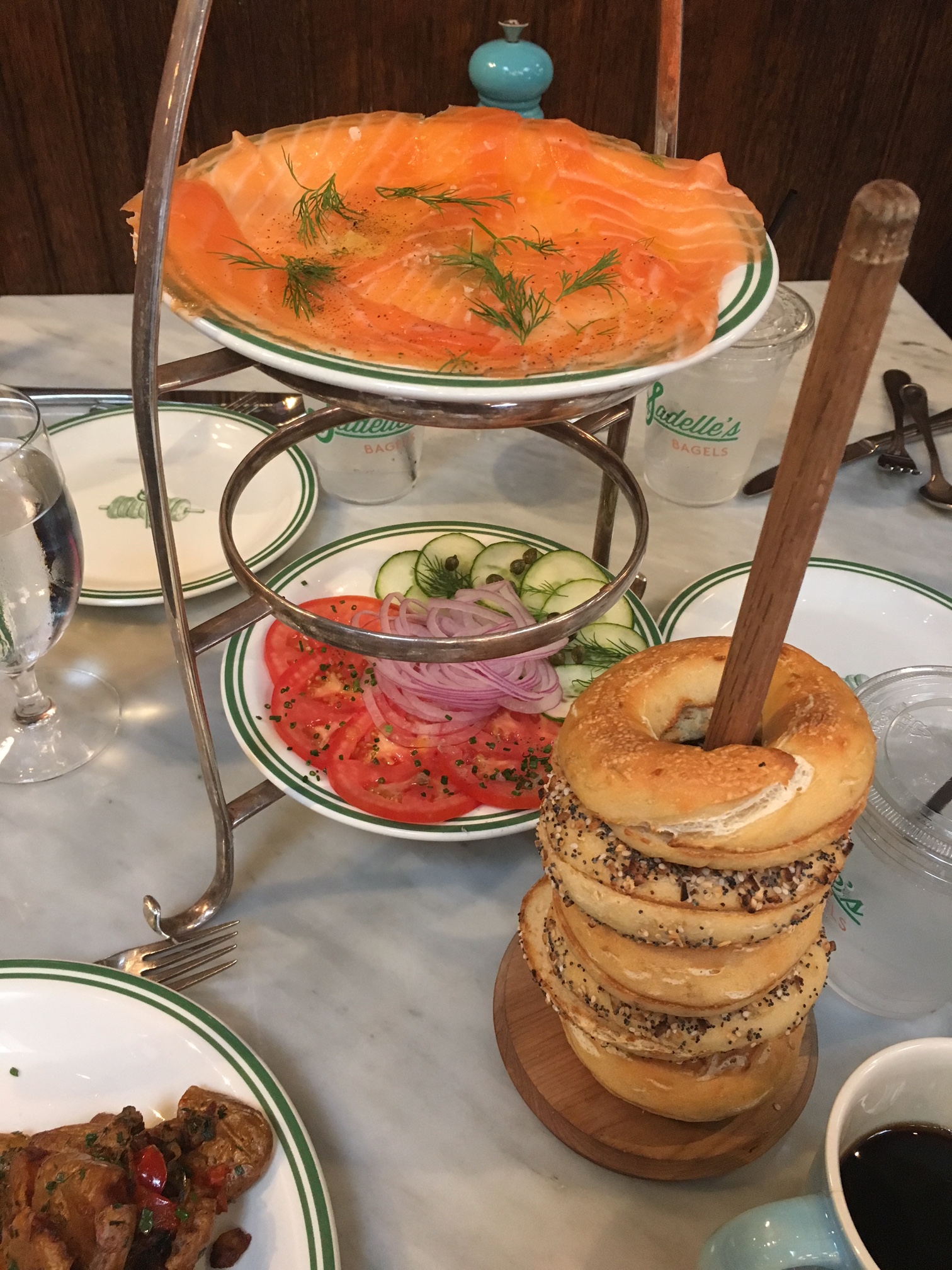 I brought a couple bagels to Simone and her husband Simon who were also staying nearby and Simone and I finally got around to rehearsing our Jewish Book Council pitch. We didn’t have a ton of time before lunch which we planned at SENZA GLUTEN – so we did lots of squats and jumping jacks to burn off breakfast first. Just kidding, clearly you don’t know us by now if you believed that one. Senza Gluten was right in our neighborhood too – actually caddy corner across from my apartment which made it another great convenient choice. My kids and husband had salad and pizza (yes again, duh) and I chose the lasagna. They offered a basket of bread to the table which I habitually attempted to send back until I remembered EVERYTHING there is gluten free. Woot! Our sweet reader Francine also came to lunch with us and ordered the chicken parmesan which was delicious (yes I ate off her plate like we were old friends). My lasagna was great and the caesar salad which Simone ordered was tasty too! Oh and how could I forget the tiramisu?! We all shared it and let’s say there fingers wiping the plate clean. Yes, they belonged to a 5 year old but she just did what we all were thinking. After lunch my family walked and walked and walked. We explored SOHO and probably got in no less than 4 miles by the end of the day. My middle daughter and I split off from the others to go shop and on the way home picked up a quick dinner to go from Pepe Rosso (yes more Italian) but this time I just got a Caesar salad and she got some buttered gluten free noodles. It was the perfect end to the day – not too much food but satisfying nonetheless. The next day was our big presentation so we grabbed some almond milk lattes from THIRD RAIL, right across the street from my apartment and headed out. Lunch came after our pitch at JBC upon which we were entirely famished. Naturally neither of us could eat prior to speaking in front of hundreds of people so needless to say we were ready to binge by 1pm when we finally ate. Simone, Simon and I ate at KESTE and guess what we ordered – yes more pizza. Listen, I personally do not get sick of pizza and clearly there are others like myself. I know this because we witnessed “Scott’s Pizza Tours” on parade while we ate. Apparently there is a tour. For pizza. Talk about a dream job. Anyway this pizza was straight out of a brick oven and very authentic. I am really kicking myself for not finishing that last piece I took back to our apartment. The next day was departure day (sad face) but not without another almond milk latte (Third Rail) and bagel and schmear to go (Sadelle’s). I may have consumed more food this week than all of last month but I can assure you every bite was worth it. I hope you’ll have a chance to try some of these restaurants next time you visit NYC and enjoy them as much as I did!