Today I have something so incredibly special to share that I am not only honored, I am drooling on my laptop. Think I’m joking?! Then hold on to your britches! My friend Alyssa from Barefoot Provisions has been by my side from the very beginning of this blog. In fact I was their first ever guest post when I wrote the recipe for these PALEO ALMOND DELIGHTS. Anyway, Alyssa (and team) from Barefoot are the nicest, awesomest, most genuine people ever – so when she told me that she made a recipe for PALEO BAKLAVA I might have done a cartwheel in my kitchen. Ok that’s a lie, but I got super excited in a spazzy sort of way. So let’s get to the good stuff… meet Alyssa, Baklava extraordinaire and all around superstar! Take it away lady….

I had seen paleo baklavas, and even a raw coconut wrap baklava but I wanted to use these things to imitate a phyllo dough, and make the most legit baklava I could. Luckily, they were perfect. I’m saying, one of the best things I have made in my life, period. They don’t have that same crunch that real baklava has from the hundreds of layers of phyllo dough that is traditionally used, but the flavor and mouth feel is pretty close the real thing, without all the flour, sugar, etc. They take a bit of work, but I promise that the outcome is totally worth the work in the kitchen.
You will need: (makes 4 pieces, double or triple recipe as needed)

Cut the coconut wrap in half, with a pizza slicer or scissors. Now cut each half into fourths. Place the pieces on a baking sheet lined with parchment paper or greased well.

Combine walnuts and pistachios in a small bowl and crumble with your hands, or fork, breaking into smaller pieces. 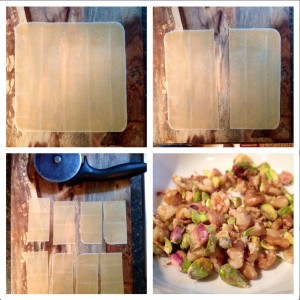 In a small pan over medium heat, add coconut sugar, cinnamon, clove, and lemon juice and begin to heat while stirring. Add in nuts and bring to high heat. Lemon will begin to reduce and sauce will thicken. Turn down heat and continue to break up the nuts with a fork while stirring.

Divide the mixture into as for and spread across 4 pieces of coconut wrap. 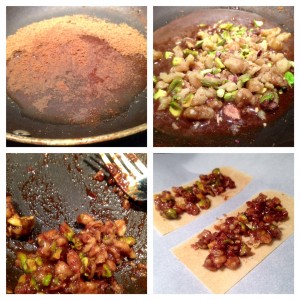 Now drizzle the slightest bit of honey over each of the four pieces that contain the nut mixture. Top with a dry piece of wrap and press firm. You should have 4 pieces total now. 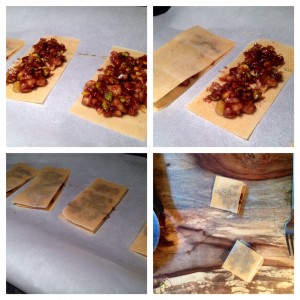 In the same pan that you had the nuts and sugar in, add 1 tbsp ghee and heat on high, stirring around to pick up any cinnamon, sugar, or clove that is stuck to the pan. When hot and liquified, drizzle the ghee over each of the four double deckers. Sprinkle with one last dash of cinnamon and place in the oven. 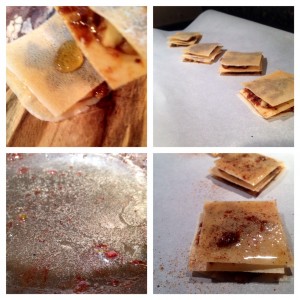 Bake at 300 for 7 minutes. Take them out and cool for a few minutes, flip and bake for another 3 minutes at 300. Turn oven down to 170 and remove pieces and let cool while oven is lowering. After a couple minutes, put back in oven and bake low at 170 for 15 minutes. Remove, cool, and dig in. 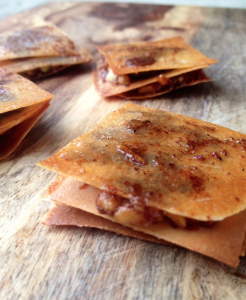 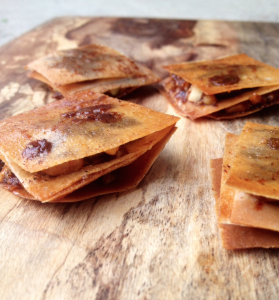